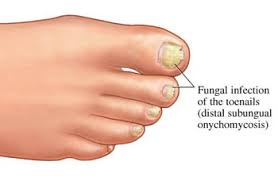 What by weight and size is the largest organism in the world? If you guessed Blue Whale then you are close but still off. The largest organism in the world is a honey fungus, living in Blue Mountains of Oregon. Stretching for miles underground and weighing more the any other creature, this particular fungus sets a number of records. However, the honey fungus is not the only fungus setting records.

Also known as onychomycosis, toenail fungus is among one of the most wide spread detrimental fungi that millions of Americans have to deal with annually. Turning a regular day into a chore and presenting a worrying range of symptoms, nail fungus needs to be treated when it is discovered.

The problem, however, is that many people don’t realize they have onychomycosis or will try to ignore it instead of seeking help. With that in mind, lets take a moment to learn more about nail fungus. In particular, we will look at what fungus and nail fungus is, where it will appear in the nail, signs that you can look out for when determining whether or not you have nail fungus, and a list of types of nail fungus that you can watch out for. While fungus in general plays an important role in our ecosystem and can be impressive, it is best to take action and learn how to remove it if you become infected.

So What Exactly Is Toenail Fungus?

To understand nail fungus, we must first understand fungus in general. In a kingdom of its own, fungus is all around us. There are thousands of different kinds of fungus that range in purpose. The vast majority of fungus out there is completely non-threatening to us. For example, if you have ever enjoyed beer or cider, then you have fungus to thank. Also, the principle rising agent in bread is yeast, a form of fungus. Every time you eat any kind of leavened bread or drink alcoholic drinks, you have yeast to thank.

So what is toenail fungus and why is it harmful to people while the majority of fungus out there is safe? Well, there are three types of fungus that just happen to thrive on people’s skin in the right conditions. When it comes to onychomycosis, the biggest cause of nail fungus is a dermatophyte called Trichophyton rubrum. In addition, Trichophyton rubrum mentagrophytes as well as the yeast candida albicans are also known to cause a few cases of onychomycosis as well.

Onychomycosis occurs in and around the nails because the toes are particularly susceptible to the right conditions for growth. Remember, fungus floats freely in the air, and it is only a matter of bad luck that can lead to an infection. Nail fungus has an increased risk of occuring with poor hygiene, as well as in conditions where the feet are submerged, damp, or wet for prolonged periods of time. This provides the fungus with the opportunity to get into your nails where they use the heat to grow. Public places like public pools and locker rooms where there is a lot of water and bare foot traffic can pose some risk. As it currently stands, an estimated 10% of adults have onychomycosis, while more then 20% of the elderly have had recently or is currently dealing with onychomycosis.

Onychomycosis will appear under the nails of your toes. There will be discoloration, as well as a slow change in the consistency and look of the nails. You can have nail fungus for years before feeling any pain or discomfort resulting from the fungus itself.

What Are Some Signs That I May Have Nail Fungus?

If you are like me, then what you really want to know is whether or not you may have some signs of toenail fungus. Truth be told, it can be surprisingly challenging to figure out what the cause of nail discoloration is, as several different things can result in similar nail problems. Some of the potential causes of discolored nails include onycholysis, pitted nails, paronychia, hematoma, and pseudomonas bacteria. Abnormal nails can result from many things, and you may need to see a podiatrist to be certain. At the very least, check online images of these conditions to see how closely your case reflects what these conditions look like. Also do an image search for onychomycosis to see how your nails compare.

One of the biggest characteristics of onychomycosis is that it will gradually become worse over time. It will begin as a relatively minor discoloration and slowly change over months or years. The quality and color of the toenail may slowly get worse over time. In addition, you may begin experiencing pain whenever pressure is applied to the toenail. Without some kind of assistance, these conditions will worsen with time.

Better toenail hygiene can go a long way to suppress and even turn back the effects of nail fungus. You can file off any white markers or areas that have particular discoloration. You can also work to keep your feet dry and away from moist environments. There is also over-the-counter remedies that can be used to help attack the fungus directly. Anything with an antifungal agent may work. The challenge you will experience, however, is that as onychomycosis can be caused by many different fungi and the intensity of the infection can do a lot to start or stop it from being cured, you may have limited success. Ultimately, you may have to either see your podiatrist or your primary care physician for a more long lasting cure.

Your doctor may suggest you take newer oral anti-fungal pills that can work through your blood stream and fight the fungal growth. Topical treatments can also provide some relief as well as slowly fight back the fungus you have. As a final note, surgery may be your only option. If the onychomycosis is bad enough, then you will have to remove the infected nail. More often then not, surgery is only held as a last resort option when the pain of the infected nail is unbearable.

How Can I Prevent Nail Fungus?

As stated above, onychomycosis is considered a result of bad luck and poor hygiene. By improving aspects of your hygiene, you can prevent nail fungus from occuring. Expose your feet only to dry socks or hosiery, replace what you are wearing every day, be careful about wearing the same thing more then once before it is washed, and above all, keep your feet dry. Use soap when washing your feet and clip your toenails so that they do not extend beyond your toes. Avoid shoes that do not fit well and use shoes that provide plenty of room to breathe. Make sure your personal pedicure equipment is disinfected and safe and do not apply nail polish to nails that may be infected.

What Are Some Of The Types Of Nail Fungus?

The four primary kinds of nail fungus are named based on the site they start in your nail. When determining the types of toenail fungus you may have, be sure to keep this in mind.

Along with causing onychomycosis, DSO is the primary cause of Athletes Foot as well. That being said, if you have Athletes Foot and nail fungus, then DSO is probably to blame. DSO is among the most difficult to treat and can last a lifetime, causing pain and discomfort when wearing shoes. It is also the most common type of onychomycosis to occur in people.

WSO is the second most common fungus that causes onychomycosis. It will affect the top layer of your nail. You will first notice white bumps. Eventually, the white bumps will grow and eventually take over the entire nail, leaving a white crumbly mess in its wake. WSO is easy to treat. In addition, with WSO, the infected nail will not separate from the skin.

A yeast infection of the nail, Candida can lead to the nail being weak and the discoloration colors of green white and brown to appear. In addition, there may be thickness, bruising, and swelling around the nail. This is among the most common types of nail fungus that is painful.

Frequently occuring in people with HIV, PSO is known to affect the base of the nail where it hits the skin. This often leads to the skin around the foot becoming infected as well. 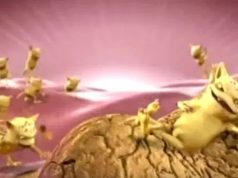 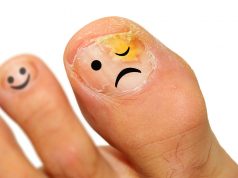 What Do Yellow Toenails Mean?