Onychomycosis or toenail fungus infection is a fungal infection that affects the nail bed, nail plate, or both. The nails are often deformed and their color is changed to yellow or white. Diagnosis is done based on appearance, wet mount, polymerase chain reaction, or a combination of these. Treatment can be done using oral terbinafine or itraconazole.

The toenails are ten times more likely to be infected than fingernails. About 60 to 80 percent of the cases of infection are caused by dermatophytes. A dermatophyte infection of the nail is also known as tinea unguium. A lot of the remaining cases are caused by nondermatophyte molds such as Fusarium, Aspergillus, and Scopulariopsis.

It is possible for you to have nail fungal infection when your nails show the following symptoms: thickened nails; brittle, crumbly, and ragged nails; the nails are distorted in shape; the nails smell foul; a dark color appears underneath the nail caused by the debris formation; the nails having whitish or yellow-brown discoloration.

Several nail disorders have similar symptoms as other conditions like psoriasis. This is why it is crucial to achieve an accurate diagnosis from the doctor. This will make sure that you won’t waste your time and money on treating the wrong condition. Qualified physicians may diagnose a fungal infection through a physical examination. At times, a nail sample may be tested at a lab to confirm the diagnosis and determine the microorganism that caused it.

Treatment options for nail fungal infections include oral medications, topical antifungals, and the latest type of treatment which is the medical laser treatment. Any type of nail fungus treatment will destroy any living fungus, but this won’t be able to reverse the fungus-inflected damage to the nail. Tablets can be consumed for approximately 6 to 12 weeks. According to clinical studies, oral medications produce better results than topical solutions. Such medications require the doctor’s prescription.

1All about the African Bird Pepper

The African bird pepper is from the Solanaceae family. It is from a perennial plant that is closely related to the cayenne pepper. It is often considered a type of cayenne pepper. This grows wild in the northwest African regions. It is native to this area, but it is now grown globally. It is one of the hottest peppers cultivated in the world, with a whopping 175,000 Scoville heat to brag. Imagine that pepper is already considered hot when it is at 100 Scoville Heat units, much less at 175,000.

Since this particular cayenne pepper is now cultivated in many geographical locations with various customs and languages, it is also known now by so many names. These names include the following: African Chilies, Capsaicin, Cayenne Fruit, Cayenne Pepper, Garden Pepper, Hungarian Pepper, Mexican Chilies, Pili-pili, Paprika, Poivre de Cayenne, and others.

Capsaicin exhibited antimicrobial properties against seven isolates of five fungal species and nine isolates of two oomycetes species. Capsaicin which is found in peppers is a superb antifungal agent. A possible new material may be obtained through a chemical reaction between this compound and cellulose.

The antioxidants found in this type of pepper can help fight off certain cancer cells. Some of these cancer types are colon cancer and breast cancer. It also contains polyphenols that help provide relief from high pressure, cardiovascular disease, and diabetes.

May help with cognitive impairment

Memory and cognitive impairment may be treated with a compound known as piperine, which is found in the African bird pepper. Some studies on this revealed that this is beneficial to those who suffer from Alzheimer’s disease, dementia, and other illnesses that are related to age.

May help maintain a healthy skin

African bird pepper seeds may be used as a skin remedy for issues like vitiligo. Vitiligo is a skin condition that is closely linked to abnormal skin pigment. Piperine in cayenne fruit can help the skin to produce new skin pigments, reducing the risk of skin cancer caused by excessive solar radiation.

Based on a study, consuming the African bird pepper may boost one’s appetite. This is closely related to olfactory stimulation, which is a result of the black pepper smell. This is beneficial to those who have a poor appetite.

This type of pepper contains phytonutrients in its outer layer. This can help break down fat cells. Thus, this can stimulate one’s appetite, but in a 2010 study, it was established that black pepper could activate the body’s existing calories.

Acts as an arthritis treatment

The African black pepper has anti-inflammatory and anti-rheumatism properties, which make it useful for improving the body’s blood circulation. If blood circulation is smoothly flowing, the pain brought by non-fluent circulation will be completely addressed.

Works as an antidepressant

The African black pepper is a natural antidepressant. This pepper may help with one’s mood due to its mood-regulating serotonin. This also enhances the production of endorphins found in the brain. Endorphins can help improve one’s mood and eliminate pain.

The African black pepper reduces the possibility of developing atherosclerosis since it reduces blood cholesterol as well as triglyceride levels. This also helps in reducing platelet aggregation and increasing fibrinolytic activity. Cultures that consume a large amount of this black pepper have shown a reduced rate of cardiovascular diseases.

Excessive amounts of P levels in the skin have been associated with psoriasis. Capsaicin has been known to reduce scaling, swelling, and combined psoriasis severity.

African black pepper has antimicrobial elements. This makes the compound useful as a good cough and flu medicine. This remedy can help clear a clogged nose and remove phlegm from one’s throat.

The African black pepper is not recommended to those who have undergone abdominal surgery for this can irritate the intestines. It can also make you sneeze.

Annatto and Its Wondrous Benefits 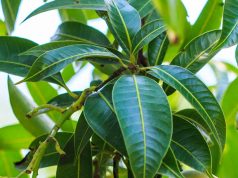 What Health Benefits Can Be Enjoyed from Mango Leaves?

Annatto and Its Wondrous Benefits